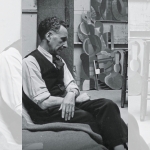 Alfred Reth is highly regarded as a member of the early Cubist movement and also for his innovative textural approach to abstraction during the post-war period.

Arriving in Paris from Budapest in 1905 he first studied in various academies where his revolutionary approach soon became evident. His early work was marked by Hindu influences, in particular the concern with a harmonious (and thus sacred) juxtaposition of straight and curved lines which he found to have a correlation of 2:7 in nature. This focus would already bring him close to total abstraction. At the same time he was fully engaged with the Cubist aesthetic, and both aspects of his work could be seen in his contributions to the Salon d’Automne and the Salon des Indépendants of 1910, 1911 and 1912. Meeting with critical acclaim he started to exhibit frequently, individually at the Galerie Berthe Weill in Paris and the famous Gallery Der Sturm in Berlin and also with fellow avant-garde artists Léger, Metzinger, Le Fauconnier, Kandinsky Delaunay in several international venues.

He then volunteered for military service in the first World War, and it seems that with the distress and instability of this period Reth reverted to a more directly representational manner. This decision was echoed in the work of many other avant-garde artists including Léger and Picasso. His work continued to evolve however, and soon he once more looked towards a non-objective pictorial language, and in 1932 he became a member of Abstraction Création. This large association of artists quickly became an influential rallying point for the “abstract contingent” of the European avant-garde, and counted among its members Kandinsky, Mondrian, Herbin, Gabo, Arp.

After the second World War Reth’s concern with the harmony of forms developed further to include the “harmony of materials” as well, and he began experimenting with different textures, introducing sawdust, powdered brick and eggshell into his compositions. This was a pioneering development in the post-war avantgarde, and he explained his motivation as follows: “I think that non-figural art should find its own materials; to be able to express our ideas in a spontaneous fashion, we should abstain from using traditional materials...to avoid the separation of colour and material.” Reth exhibited these new works at the Salon des Réalités Nouvelles, which he helped launch as an important new platform to the post-war avant-garde.

A sure sign of the growing public recognition of Reth’s role in the avantgarde were the numerous international exhibitions, among others Sao Paulo (1949), Copenhagen (1950), Stockholm (1951, 1952), Chicago (1966), London (1969). Michel Seuphor wrote of the artist at this time: “Reth has for a long time devoted himself to the study of materials... No one has investigated the possibilities of new techniques more thoroughly”. Major Museum shows included “Le Cubism 1907-1914” Musée d’Art Moderne Paris, 1953, and more recently “Alfred Reth, Retrospective” Musée d’Albi, 1984; “L’Ecole de Paris 1909-1929”, Musée d’Art Moderne Paris, 2000; “Paris Capital of the Arts” Royal Academy, London, 2002. The importance of Reth’s oeuvre is not only in it’s contribution to the development of Modern Art, but also as Julia Cserba writes in the recently published Catalogue Raisonné on Alfred Reth, in the work’s “inherent lyricism and discreetly concealed spirituality.”