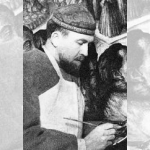 Serge Rovinsly  spent his childhood in Manchuria, where he first got acquainted with Chinese lacquer painting.

In 1920 he emigrated to France and settled in Paris. He decided to devote himself to art. He studied at the studio of  Antoine Bourdelle and worked with Jean Dunand.

For a long time he lived in Spain, and have created many works on Spanish themes. He painted a four meter panel for Toledo Cathedral and performed a project of scenery for Ida Rubinstein Ballet (early 1930s).

He held solo exhibitions in his Paris studio (1924, 20, rue de Navarin), in the J. Rubinstein Galleries as well as at Loujetzky Gallery in The Hague (1937). Participated in exhibitions of Russian art in Paris (La Renaissance Gallery, 1932) and in Prague (1935), in the International Exhibition in Paris (1937, lacquer panels) and Salon of Artists-Decorators (1939). The works were purchased by the Luxembourg Museum.