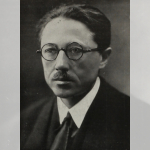 Son and grand-son of entrepreneurs in the architectural painting, Jacques-Emile Ruhlmann was born in 1879 in Paris. He was early prepared to become the head of the family enterprise and entered the studio of a painter-decorator so he could learn the job. However, from 1900, the real vocation of Ruhlmann dawned and he began to draw and to conceive his own pieces of furniture. In 1907, his father’s death made him become the head of the firm which he shifted towards research in the field of decorative arts, confirming the path he had taken several years ago.

From 1910, Ruhlmann exhibited at the Salon d’Automne and soon demonstrated his talents as an interior and furniture designer, meeting with an increasing success and counting, among his clients, prestigious personalities such as Jane Renouardt, Jacques Doucet or Jean Puiforcat.
The International Exhibition of Decorative Arts in 1925 intervened as the crowning of a latent triumph ; the Hôtel du Collectionneur, conceived with the help of his friend and architect Pierre Patout and the sculptor Joseph Bernard, was then considered as a masterpiece of rare sophistication and perfection. He was appointed Chevalier of the Légion d’honneur the same year and was promoted to the rank of Officier in 1928.

Jacques Emile Ruhlmann must be seen as an heir and a renovator of the great tradition of French cabinetwork, although he was never taught this art. His pieces of furniture, elegantly distinguished, showed a taste and a knowledge of the styles of the past, without any pastiche, as well as reminiscences and references to some prominent figures of the history of decorative arts, such as the Jacob brothers to whom he borrowed some patterns and traits – such as saber back feet. The finesse and the abundance of wood veneers and precious materials inlays, realized with virtuosity by the studios of the firm, made him one of the most inventive and sophisticated of the great decorators of the Art Deco movement.