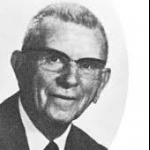 Louis Sognot studied at the Bernard Palissy school and was trained by Jansen who taught him the basics of cabinet making. Then he learns from Krieger and works for small spaces which makes him turn to the functional aspect of furniture. He integrates modern materials such as duralumin, ice, glass and rattan into the design of his furniture. In 1920, Louis Sognot joined Primavera, which he managed until 1930 with Charlotte Chauvet-Guilleré. From its creation in 1930, he joins the Union des Artistes Modernes, UAM. In 1932, he created with Charlotte Alix le Lakarmé a light and incombustible moulded plastic that offers great freedom of form. In the mid-1930s, he worked on two major Art Deco projects: the Maharaja Palace in Indore and the liner Normandie. Louis Sognot collaborated with Serge Mouille, Maurice Rinck and Charles Wagner. He teaches at the Ecole Boulle, the Ecole Nationale Supérieure des Arts Décoratifs and the Ecole de l'Union Centrale des Arts Décoratifs.