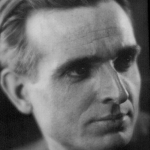 André Sornay was born in Lyon to a father and grandfather who were furniture makers and whose factory was founded in 1868. He studied at the Ecole des Beaux-Arts in Lyon. After his father's death in 1919, he took over the factory at the age of 17. In 1920, his father stopped producing period furniture and turned to the design of contemporary furniture with pure lines.

In Lyon, he took part in the Salon de l'ameublement, his first public exhibition, then in the Salon d'Automne de Lyon where he exhibited a sycamore bedroom set. In 1925, Sornay exhibits at the International Exhibition of Decorative Arts at the Pavilion of Lyon and Saint-Etienne. In 1945, the Sornay factory suffers a violent fire and most of the archives disappear. In 1950, he invents the "Tigette Sornay" which is used to fix or bind elements of a piece of furniture.

Then, he passed the factory on to his children who transformed it into a furniture publishing company. Sornay finds in his turn the pleasure to paint. He died in 2000 in the greatest discretion. His creations were rediscovered at the end of the 1990s and are now part of the largest private collections.