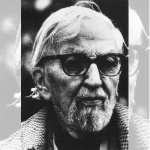 Jean Souverbie was born in 1891 in Boulogne-Billancourt from a wealthy background. Blessed with a fragile constitution, he received home lessons from his father and sisters, then from a coach. While he was drawing relentlessly, young Jean showed early predispositions for this art and was encouraged by his father, who gave him the opportunity to learn painting while only aged 10. He also urged him to develop his culture – through reading in particular – and his natural apparition for art – besides painting, Jean Souverbie showed a keen interest in theater when his parents took him, once a year, to the Châtelet.
From 1908, Souverbie family began sharing its time between suburban life and the South of France ; the discovery of the warm light and bright colors of the Mediterranean Sea would have a great impact on the young-to be artist ; he then developed an interest in great ancient civilizations such as Greece and Rome, which would inspired him lot of paintings in the future, with mythological, historical and religious subjects. At the same period, Souverbie’s family settled down in Saint-Germain-en-Laye, and allowed Jean to meet with Maurice Denis, who also lived there. The two men became close friends until Denis’ death in 1943. In 1911, Jean Souverbie entered Jean-Paul Laurens’ atelier at the Académie Julian and in 1916, he began to spend time at the Académie Ranson in which old Nabis Vallotton, Vuillard, Bonnard and Sérusier reached regularly ; their lesson, which was the one of the liberation of colors and shapes, had a profound impact on Souverbie and his style became bolder.

In the 1920’s, Souverbie turned toward cubism after the discovery of Georges Braque’s work, but the decisive turning point was reached in 1925, when he exhibited along the Section d’or at the Vavin-Raspail gallery and met Charles Gleizes, André Lhote and Pablo Picasso, who he would admire as no other. This master, who had become a friend, deeply influenced Souverbie’s artistic conceptions. His nudes became more and more geometrical, their sculptural bodies echoed cubists icons of the Spanish painter.

Glory and renown were really reached by Souverbie in the 1930’s ; he turned to the realization of monumental works which made him famous around the whole world and were at the origin of numerous commissions. In 1937, he was part of the artists chosen to decorate the new Palais de Chaillot, built for the Universal Exhibition to replace the Palais du Trocadéro. During the second half of the 1940’s, he contributed to the decoration of 8 ocean liners, such as the Ile-de-France, the Liberté or the Laos ; those projects allowed him to work with the greatest decorators and cabinet-makers of his time, such as the Leleu. In 1946, Souverbie was appointed at the Académie des Beaux-Arts, while in 1948, the Ecole des Beaux-Arts of Paris decided to open a studio of monumental painting especially for the artist, who became emeritus professor at this time. He then taught in the illustrious institution for more than 17 years and had, as his students, his son Romain Souverbie who was also a painter, Jean Le Merdy, Philippe Lejeune, Jean-Pierre Cassigneul, etc.

Thanks to an exemplary career and an outstanding personality, Souverbie is part of those artists who were considered, during their lifetimes, major figures of 20th century art.