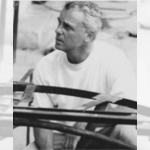 Sylvain Subervie is a French sculptor, born in Suresnes in 1950, self-taught and versatile. He has long wandered on the frontiers of art by evolving in the world of fashion and couture before moving on to the act of creation. Sylvain takes the decision to give life to timeless works: he gives himself over to the shaping of noble materials, such as iron or rock crystal, a mineral material that attracts and fascinates him.

The forging of iron was a decisive step in Sylvain Subervie's artistic achievement. Having become the expression of his own personality, his talent comes to life in a balance of power between wrought iron and himself, which he has maintained to this day. A first collection of designer furniture took shape in 1995. He exploits natural elements in an unprecedented way by bringing them together in the same piece of furniture or object.

Then by intuition or by talent, Subervie has been able to join the great French tradition of Decorative Arts. As time goes by, he expresses his art on another scale, by imagining monumental works of art. The first one was the "Giraffe", then the "Bench of Fishes", French cultural heritage since 2008, "the Army of Shield Warriors, at war against the war". He definitively signs his works by creating "form through emptiness".