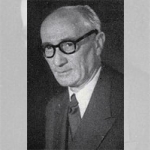 André Thuret was born on November 3, 1898 in Paris. From 1922, he worked as an engineer at the Bagneux and then Bezons glassworks. He took part in the 1925 Exhibition of Decorative Arts and obtained an honorary diploma. In 1926, he became assistant then head of the chair of Applied Chemistry for the Ceramic and Glass Industries at the Conservatoire National des Arts et Métiers and Expert at the Cour d'Appel de Paris.

In 1928 and 1932, Thuret exhibited at the Salon d'Automne and obtained his first brochure from the Société d'Encouragement à l'Art et à l'Industrie. He was then invited to participate in the United States, in 1929-1930, in the "Glasses and Tapestries" Exhibition. Afterwards, he regularly exhibited at the Salons des Artistes Décorateurs, d'Automne and in various galleries. In 1951, he took part in the Glass Exhibition at the Pavillon de Marsan. A member of the S.A.D. and U.A.M. Committee and a member of the Salon d'Automne, André Thuret has been a Knight of the Legion of Honour since 1947.

This scientist and artist creates shapes, rhythms and colours for the glass pieces he creates. All of Thuret's vases, bowls or flasks are unique pieces, blown and worked according to the traditional technique at a temperature exceeding 1 000 degrees.