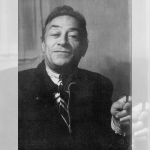 Touchagues arrived in Paris in 1923 to work as designer and illustrator in several newspapers ( L'Art vivant, Paris-Journal, Les Nouvelles littéraires) and satirical papers( Le Crapouillot, Le Charivari. He will also be an parliamentary draftsman, delegated by the Fine Arts as a draftsman at the first Peace Conference and at the arrival of General de Gaulle in Paris. He also illustrated many books of Colette, Sacha Guitry, Marcel Achard, Marcel Ayme, Georges Duhamel, Joseph Delteil (Joan of Arc), and become wellknown through three albums (Femmes et modèles, La Parisienne et Vagues à St-Tropez) as the designer of the woman.

His taste for decoration lead him to realize stage sets and costumes for his friends from Lyon Henri Beraud and Marcel Achard, but also porcelain decorations for Camille Le Tallec. He worked for Charles Dullin at l’atelier, and Louis Jouvet at the Comédie française.

He made numerous murals and frescoes : the Chapel of the Mount Cindre Hermitage in Saint-Cyr-au-Mont-d'Or near Lyon, a panel gemmail to Metro Station F . Roosevelt in Paris, painted glass for windows of the Museum of Modern Art in Paris. He decorated the bar and smokehouse in the comédie française.