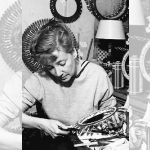 Line Vautrin, a 20th century jeweller, had in her the taste and demand for freedom. Self-taught, disunited from the artistic movements that were taking place before his eyes, his work is not divided into distinct periods closed in on themselves but is more akin to the movements that accompany the artist's facetious, playful and flamboyant mood.

She introduced her first models at the 1937 Universal Exhibition. In addition to her famous bronze buttons, she presented necklaces, bracelets, earrings, not to mention comb covers, mules, chancelleries, cothurnes, forage, caps now gone. As her first shop opened in 1938 in Paris, Line Vautrin married Jacques-Armand Bonnard and began expanding her range with bronze boxes - powder trays, ashtrays, pill boxes. 106 rue Vieille du Temple, where the couple had settled, quickly became a major artistic centre and an indisputable centrifuge of talent. Line Vautrin's hands carved, carved, carved, set, intertwined and inlaid the pieces not only with precious jewels and metals, but also with mysterious rebuses and sculpture-like analogies.

When the two spouses separated at the end of the 1950s, Vautrin experimented with new materials, including cellulose acetate, also known as "Talosel". Objects intended for distinguished, almost intellectual ornamentation of interiors then emerged. In the early 1980s, his work was rediscovered by David Gill, a London collector, who organized numerous exhibitions in his honour around the world. In 1992, she received the National Crafts Prize for her research in decoration and inspired Yves Saint-Laurent to create the CINEMA bottle.

There are very few artists whose vivacity has been and will remain so outstanding. Even today, we can still be swooned into our mirrors to discover a little word typed in the machine that says: "if your mirror breaks, no, no, no, you won't have seven years of misfortune". Between sculpture and jewelry, between ornaments and poetic evocations, Line Vautrin was the greatest jeweller of the 20th century.