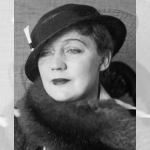 In 1902, Gerda Gottlieb attended the women's course at the Royal Academy of Fine Arts in Copenhagen. Two years later she married one of her fellow students, the painter Einar Wegener. Gerda soon reveals her talent as a draughtswoman and idealizes women. She lived from illustrations for the press and specialized in advertising. She was very interested in fashion. The couple moved to Paris in 1912 where the international bohemian became their new family. In 1914, Gerda's commitment to France included a commitment to anti-German satirical press cartoons.

In the 1920s and 1930s, Gerda still draws a lot and exhibits regularly (at the Salon d'Automne and the Salon des Indépendants). In 1925, at the International Exhibition of Modern Decorative and Industrial Arts, she won several medals, including two gold medals (for her stained-glass windows and for her illustrations). Gerda targets a motif that fascinates her: the image of her husband in female transvestite who plays the role of muse. Her double, Lili, becomes, by mutual agreement within the couple, a figure of creation and freedom.

In 1930, after a surgical operation financed by Gerda, Lili becomes physically and legally a woman and takes the name Lili Ilse Elvenes, alias Lili Elbe. The marriage of Gerda and Einar Wegener was immediately annulled by the King of Denmark. The following year, Gerda married an Italian officer. Lili Elbe died on September 13, 1931, in Dresden. Gerda died in Copenhagen in July 1940, forgotten and poor.