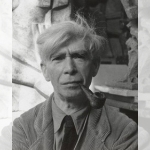 Raised on the banks of the Duina, on the edge of deep pine forests, the taste and need to "draw everything and at any time" soon became apparent to the young Ossip Zadkine. His work is characterized by the alternation and evolutionary return of themes and forms that explore artistic trends without ever stopping and really becoming part of them.

In 1905, he left his native plains and trained at London's Regent Street Polytechnicum. When he was not in the British Museum, he decorated and carved in the East End to earn a living, and sculpted in his spare time. In 1910, his father sent him to Paris. The discovery of Egyptian sculpture in the Louvre, the delight of his friendships with Amadeo Modigliani, Alexander Archipenko, Henri Gaudier-Brzeska, persuaded him to "seek life in the simplification or accentuation" of forms. This artistic postulate is evident in the entirety of his work. Zadkin became part of the primitivist movement through his use of direct size and volumes at the rigour of geometry. If he was also "neo-Greek" in the 1930s or concerned about architectural forms at the end of his life, Ossip Zadkin was in fact nothing more than a man dispensing emotion, the "chisel and mallet in his hands", in his own words.

On the eve of his death in 1967, Ossip Zadkin set in motion the last movement of his plastic reflection by bringing architecture closer together and maturing it into the sculpture he always dreamed of being more precise, deployed and profound. He is now considered as one of the greatest masters of Cubist sculpture. Zadkine artistic production lasted half a century and included more than 400 sculptures, thousands of drawings, watercolors and gouaches, prints, illustrated books and tapestries.