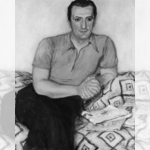 Michel Zadounaisky was born in 1903 in Odessa, off the Black Sea. After emigrating to Istanbul and then Geneva, his parents eventually settled in Lyon, France, in 1916. Without any specific training, the young man enrolled in the Beaux-Arts in 1919 where he became friends with Claudius Linossier, André Sornay and Christian Krass. He left school after one year to enter the Fournet polish factory where he learned the techniques of art metalwork. In 1924, he set up his own business at 76 rue Béchevelin. He then developed a personal style characterized by volutes and curves as well as by animal motifs, notably that of the snake, which is recurrent in his work. A complete artist, Michel Zadounaisky scrupulously participates at every stage of the production of his works, from drawing to their manufacture.

Exhibiting in many exhibitions, he is as much recognized by his peers, such as Raymond Subes who offered him several collaborations, as by critics and clients. It was spotted in 1935, at the XIII Salon des Tuileries, by Ferdinand Antoine, Viscount of Lacroix-Laval.